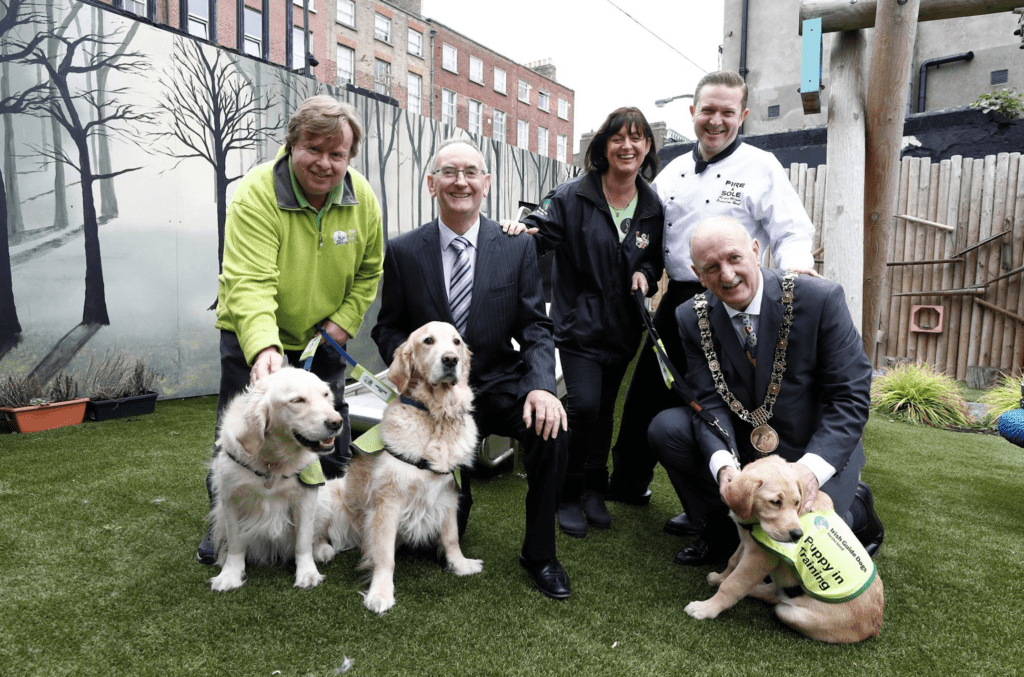 Lord Mayor Nial Ring will host the Lord Mayor’s Charity Ball on Saturday 26th January 2019 at 7 pm in the Round Room of the Mansion House, Dawson Street, Dublin 2.  Three very worthy charities will benefit from the proceeds of the Ball – Hugh’s House, Irish Guide Dogs for the Blind and the Jack and Jill Children’s Foundation. The Ball will be held in the Round Room only days after we celebrate the 100th anniversary of the first Dáil Éireann in the same room on 21st January.

The evening which is sponsored by Conference & Events Venue at the Mansion House will be one of fine food, music and fundraising in the beautiful and historic Round Room. Tickets for the Ball are priced at €125 each and they can be purchased from the Lord Mayor’s Office or at www.dublincity.ie and click on I want to pay tab.

Lord Mayor Nial Ring said, “Hosting this Charity Ball will be one of the highlights of my year in office and the three charities which will benefit makes it more special. I know of the wonderful support Hugh’s House gives to families of children who are long-term in-patients at nearby Temple Street Hospital. The Irish Guide Dogs for the Blind do exactly what it says on the tin! My family have participated in the puppy training programme and it is great to be able to support this life-changing service to the visually impaired. Everyone is aware of the vital role the Jack and Jill Foundation plays in the lives of families of children requiring intensive home nursing needs or, sadly, needing end of life care. Because of the partnership of my office with Padraic O’Kane of the Conference & Events Venue and FIRE Restaurant every cent raised goes directly to these brilliant charities.”

Padraic O’Kane of the Conference & Events Venue, FIRE Restaurant & Lounge at the Mansion House  and SOLE Seafood & Grill added: “We are delighted to continue our partnership with the Office of the Lord Mayor of Dublin in supporting the annual Lord Mayor’s Ball for 2019 which is always an amazing and fun evening – along with the support of our key suppliers, we collectively are in a position to ensure that all the donations including the full price collected from ticket sales goes directly to the three chosen charities for 2019.” 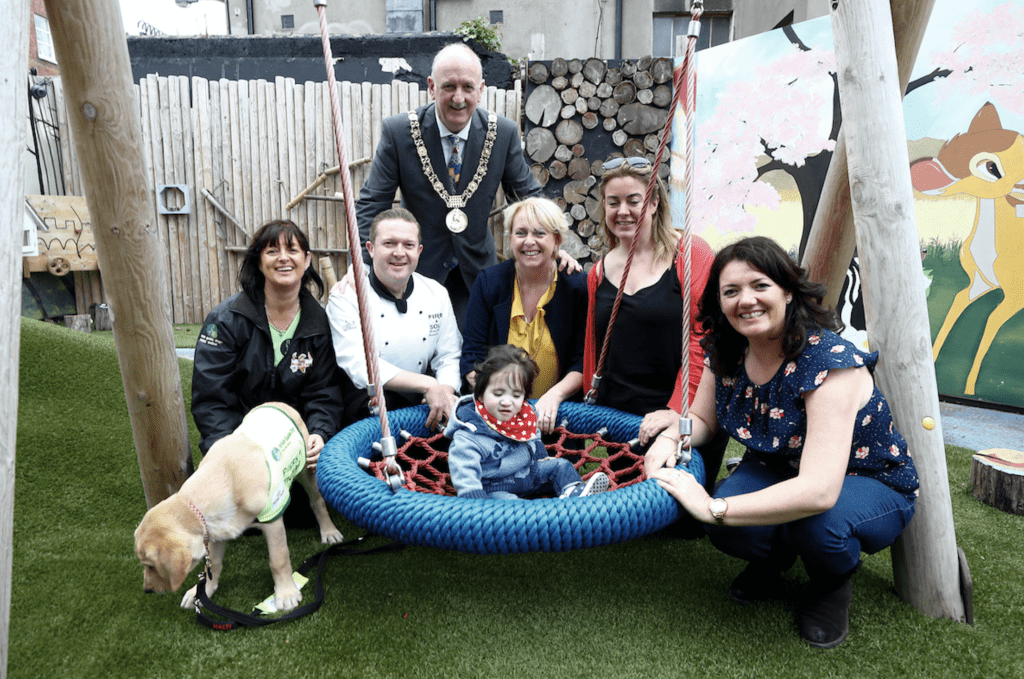 Office of the Lord Mayor of Dublin, The Mansion House, Dawson Street, Dublin 2.

History of the Lord Mayor’s Ball

The Lord Mayor’s Ball dates back to 1715 where it originally took place in the Oak Room of the Mansion House on St. Stephen’s night (26th December) and the principal invited guests were the city’s 24 Aldermen and their wives. Proceeds went towards the support of poor boys at the Blue-Coat School in Blackhall Place. In 1728 the members of the lower house on Dublin City Assembly, who were not invited to the Ball, managed to have it abolished on the grounds that it was causing ‘great inconvenience’.

It was revived in September 1861 for the visit to Dublin of the Prince of Wales and the venue was the Round Room at the Mansion House which had been built in 1821. Local businesses benefitted with ‘Ball Dresses in Fancy and Light-Coloured Silks’ for sale at Mrs. Sidford of 17 Nassau Street and ‘Fancy Tulle and Tarleton Dresses, Sylphide Wreaths and Head-dresses; for sale with James Forrest & Sons of Grafton Street. The Ball continued to be held most years until 1912.

The tumultuous events of 1913-1924, and the suspension of Dublin City Council from 1924 to 1930, meant that the Lord Mayor’s Ball was not held. Revived in 1946, it was held in the Metropole Ballroom in O’Connell Street with the Lord Mayor’s Coal Fund as the beneficiary. From 1975 to 1997 it was held in the Burlington Hotel on St. Patrick’s Day in aid of the Central Remedial Clinic. Its latest revival was in 2013 when Lord Mayor Naoise Ó Muirí held the Ball in aid of three charities and it has been held annually since then.

The Conference & Events Venue at The Mansion House boasts six stunning spaces to include the distinctive Round Room and the original Lord Mayor’s Supper room.

The Round Room was originally constructed in 1821 to receive King George IV.  Today it is one of the largest city centre locations and proudly the venue of choice for many profile corporate and private Gala, Awards and Charity dinners and Ceremonies including the annual Lord Mayor Ball. It will also be incredible to host the Lord Mayor Ball when the venue will be celebrating the 100 year anniversary of the first Dáil Éireann, which was held on 21st January 1919.

The Supper Room, with its striking vaulted ceilings and glass stained windows was built in 1864 as the Lord Mayor’s banquet hall where many figures of State and dignitaries have been welcomed over the past 150 years. In 2005 the Supper Room was transformed into FIRE Restaurant & Lounge, one of the city’s best loved and innovative dining experiences.

Information on the Three Charities:

Ade Stack & Marty Curley opened Hugh’s House in May 2015 after their son Hugh passed away.  They had watched parents all over Ireland whose babies or children were transferred to Dublin hospitals struggle to find accommodation in Dublin while still paying mortgages/rent and bills at home.  The aim of Hugh’s House is to take the stress away from parents and families, especially when their children are so sick.  Hugh’s House consists of two houses and is managed by a staff member alongside social workers from Temple Street, Rotunda, Holles Street and the Coombe Hospitals and volunteers.  Hugh’s House has also linked up with Jack and Jill Children’s Foundation to offer respite to their families.

Irish Guide Dogs for the Blind

Irish Guide Dogs for the Blind (IGDB) is Ireland’s national charity dedicated to helping people who are vision impaired and families of children with autism to achieve improved mobility and independence.  For over 40 years we have provided life-changing services and support to people across Ireland with sight loss.

The Jack and Jill Children’s Foundation

The Jack & Jill Children’s Foundation provides home nursing care to children from birth to 5 years of age with severe to profound neurodevelopment delay and respite to their families.   Through a service that is fast, flexible and child and family centred, a home nursing care plan of 64 hours and up to a maximum of 80 hours is allocated to its families.   These are children who may never walk or talk, they may be tube fed, oxygen dependent and take seizures and the average number of pieces of medical equipment for each child is 24.  The charity also provides end of life care to children going home to die, regardless of their named or unnamed medical condition.  Jack & Jill has supported 2,300 children and their families since 1997, with 355 children currently under its wing today.