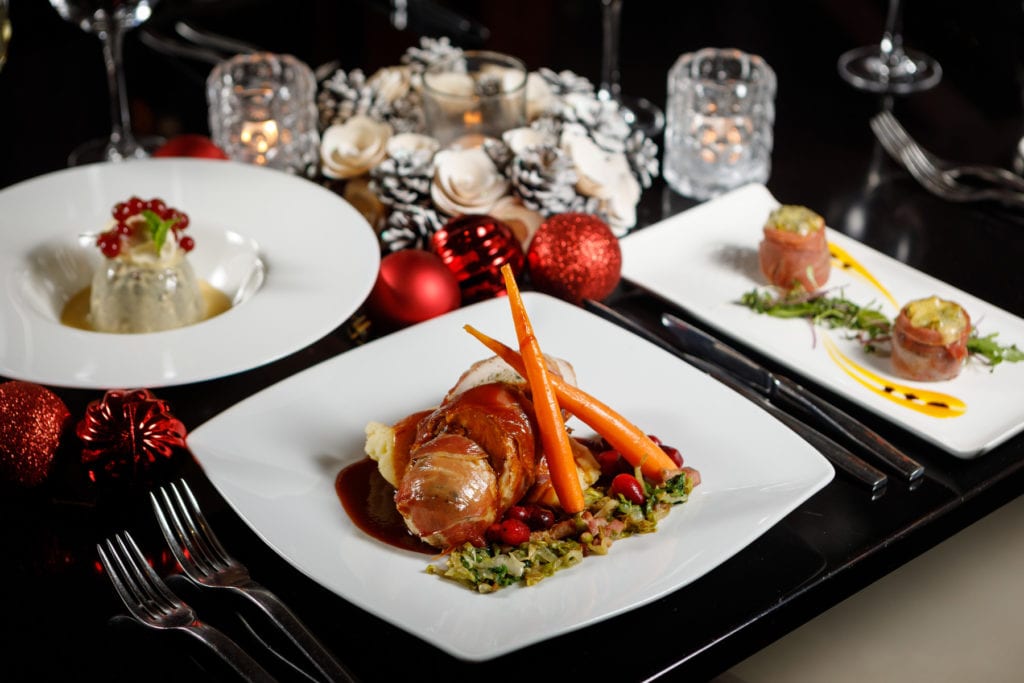 (For boiling have a few cloves, chopped onion, thyme, sage, peppercorns and a couple of bay leaves)

There are so many different ideas out there for roasting your turkey using butter, bacon etc. etc. but really I think it’s about getting the bird into the best size possible for roasting so that each part of the bird has a chance to cook through without drying another out. This requires a little bit of butchery but afterwards requires no other trickery!

It may be better to ask your butcher for a little help with this but he really shouldn’t have a problem doing this for you. You should be asking him for “Boneless turkey legs along with the Turkey Crown”.( but you want him to give you all the bones and trimmings back) Firstly ensure you have removed the bag containing the gizzard and neck that would normally be inside the turkey and set aside, then remove the wishbone; you can set this to one side to dry out if you like to pull it with someone! Now remove the wings at the second joint in. Remove the legs and set aside before removing the crown (this is the two breasts of the bird still attached to the bone) from the carcass. Set the carcass on a roasting tray ready to roast along with all the other bones, from this you can make your stock and then gravy. Now remove the bone from the legs and try to remove as many sinews as possible. ( Keep all of these bones and trimmings for the Turkey Stock)

To prepare the stuffing, begin by gently frying the onions in a pan along with the sage for about 5-6 minutes or until very soft but do not colour them, now add the butter to the pan and once it has melted set this to one side to cool. In a mixing bowl add the sausage meat, chestnuts, bread crumbs and parsley, season with just a little pepper, no salt as you are using sausage meat which contains quite a lot of salt. Mix this well and once the onions have cooled mix them through as well.  I like to stuff each leg at a time but it is possible to place one leg on the bottom, stuffing on top and the second leg on top of that, tying the whole lot up into one big joint. I think it is best to stuff each leg as an individual roast and from a timing point of view this is best for having everything ready at the same time. Once you have stuffed rolled and tied each leg it is best to wrap them well in foil before placing in the oven.

You can make up your turkey stock the day before or immediately after you have prepared the turkey for roasting.

Firstly roast all of the bones and trimmings along with the contents of the bag from within the turkey; this would be the neck and gizzard generally. Roast them all on a high heat until they are a dark brown in colour.

Remove from the oven and strain off excess fat. Place everything from the roasting tray into a large pot. Place the roasting pan over the heat on the stove and add some water. Now wash the roasting pan using a wooden spoon and the water until all the caramelized juices have dissolved in the water, now add the water from the tray to the pot of bones. Add the chopped onion, carrot, thyme, parsley and celery. Add more water to the pot just to cover everything. Bring this to the boil and reduce to a simmer for about 2 hours, ensure the water is topped up a little if necessary. Now remove from the heat and strain through a fine sieve. Allow the stock to cool for an hour before placing in the fridge overnight. The following day the fat will have settled and can easily be removed before using the gravy.

I like to cook my turkey on Christmas day. I know that once I have broken the bird down as described above it’s not going to take mine more than an hour and a half to cook, I love the smells in the house and it looks great when it arrives to the table.

Preheat your oven to 190 degrees. Place the crown on a large deep roasting tray. Season the meat well and drizzle a little oil all over the skin. Place this in the hot oven for 15 minutes before reducing the heat to 160 degrees. This will seal the outside of the bird keeping all those juices inside. You can now place the legs into the oven as well.  A time guideline for a Turkey Crown (the weight of the crown alone) is 20 minutes per Kilo plus 15 at the end but as ovens vary so much the single best way to know if your turkey is cooked is to use a meat thermometer ensuring that a core temperature of 75 degrees is reached for at least 2 minutes. Use the time guide as just that, a guide and give yourself plenty of time at the end before you intend to serve. This will allow you to cook it a little longer if necessary or just give it time to rest before carving if it is cooked through. The legs should take the same amount of time to cook as the crown but again check them with a thermometer to be sure.

Once the Turkey has been cooked pour pan juices through a fine-mesh sieve into bowl (do not clean roasting pan), then skim off and discard fat. Place the roasting pan over the stove heat as you did for the stock above then add some of the turkey stock and deglaze roasting pan by boiling over high heat, stirring and scraping up brown bits. Pour through bowl of pan juices. Add enough turkey stock to pan juices to bring total to 2ltrs. Melt the butter in a large heavy pot and stir in flour. Cook what is now a roux over moderate heat stirring continuously for 2-3 minutes. Add stock mixture in a stream, whisking constantly to prevent lumps, then bring to a boil, whisking occasionally. Stir in any turkey juices accumulated on platter and simmer 5 minutes. Season gravy with salt and pepper, then stir in cider vinegar to taste, this will just bring the gravy to life.

Some people, including my Mum, like to soak the ham overnight in a large pot of cold water to help remove some of the salt. I think that the hams today don’t require this as they don’t contain the same volume of phosphate as days gone by, but the choice is yours.

Regardless of whether you soak it or not the ham needs to be boiled for quite some time and so this should be done on Christmas eve from early in the morning. This will allow the ham time to cook and cool enough before you can place it in the fridge before going to bed! Place a plate or something similar at the bottom of the pot before putting in the ham, this will keep it off the hot surface at the bottom. Place in the ham with the other ingredients for boiling, ensuring the ham is totally covered in water at all times, allow this to simmer for 40 minutes to the kilo plus 20, once again, use the thermometer to be sure). Take great care when removing from the pot not to allow it to break up. Gently set the ham on a roasting tray and using a sharp knife remove the outer skin but you should leave most of the fat which should melt over the ham as you roast it.

Now crisscross the fat with the knife all over the surface. Where each line crosses stud with a clove. Now mix all the glaze ingredients together in a bowl and use a spoon or brush to spread half of the mix over the ham. Now place in a preheated oven at 180 degrees for 15 minutes before spreading the remaining glaze over and returning to the oven. Over the next fifteen minutes or so continue to spoon the juices from the bottom of the roasting tray over the ham every five minutes or so. Cook until golden brown and allow resting for at least 30 minutes before carving.

In a pot of cold salted water place the sprouts and bring to a simmer for about 12 minutes. The sprout should still have a little bite in the centre. Fry the smoked bacon in a hot pan until golden brown, now reduce the heat and add the butter along with the cooked sprouts. Toss the sprouts in the pan for a minute or two before serving.

Firstly peel the potatoes; roosters I think are best for this. Now turn them, meaning cut them into barrel type shapes. Bring to the boil in salted water and simmer for 5 minutes before straining. Place the goose fat in a roasting tray and then into an oven at 180 degrees until the fat is very hot. Now add the potatoes to the fat taking care not to splash your self. Return to the oven and roast until golden brown and crisp, about 20 minutes.

Peel and cut all the vegetables into similar size sticks or batons. Place in a tray along with the remaining ingredients and mix well before place in a preheated oven at 180 degrees for 20 minutes. The veg should still have a little bite to it at the end of cooking.

Peel the onion and stud with the cloves, place in a pot along with the peppercorns and milk. Bring this to a simmer and allow to stand for about an hour with the heat off to allow the flavours to come through into the milk. Now strain into a clean pot squeezing as much juice from the onion as you can. Bring this back to a gentle simmer and gradually add a few bread crumbs at a time, stirring all the time to avoid lumps. Once the sauce is as thick as you like it,  remember when adding the crumbs it will thicken more as it cooks! Allow to simmer very gently stirring all the time until the sauce becomes quite thick. Now add the cream and butter while still mixing and check for seasoning.

If you wish to make this the day before you can but do not add the cream and at the time of serving, bring the cream to a simmer in a pot before adding the ready sauce to it mixing well until warm through for serving.

In a pot bring the sugar, water, juice and cinnamon to the boil and allow to simmer for about five minutes before adding the cranberries and simmer for a further 10 minutes or until the sauce becomes quite thick. Make sure you check the flavour in the sauce, it should be a little tart but add more sugar if necessary before serving.